FOLLOWING the successful pilot of its Ford REACT! integration into Bright Ford’s Phibsborough site, Pinewood Technologies has now been certified for Ireland.

Using the proven REACT! integration in Pinewood DMS, invoice details for vehicles, parts and workshop are automatically sent to Ford via a daily feed for business analysis.

Henry Flanagan, Director at Bright Ford said: “This latest Pinewood DMS integration for our Ford dealerships will bring a number of benefits and reinforces our decision to have partnered ourselves with Pinewood Technologies. We now continue to roll out the integration to our 3 other Ford locations in Dublin.”

Pinewood has already had significant interest from other Ford dealers across Ireland, with many more sites eagerly lined up to enable the integration in the coming weeks.

Ford REACT! is one of many key Pinewood features planned for release throughout the year. 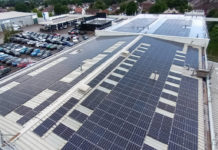